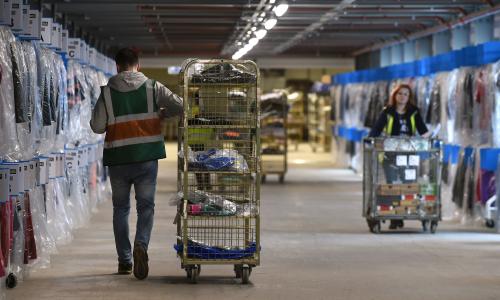 Workers on zero-hours contracts lose an estimated £1,000 a year compared with employees doing the same work, according to a study that underscores the divide between people in precarious jobs and those who have a permanent contract.

The Resolution Foundation said all workers who find themselves without a permanent, full-time role lose out in terms of wages, but people hired on zero-hours contracts suffer the biggest financial punishment.

The thinktank said its research showed that workers on zero-hours contracts faced a “precarious pay penalty” compared with other workers doing similar jobs.

The pay penalty directly associated with zero-hours work amounted to 6.6% or 93p an hour. For a typical zero-hours worker doing 21 hours a week, it amounts to £1,000 a year. An examination of workers in low-paid roles revealed a bigger penalty of 9.5%

The foundation said its analysis were the first to pinpoint a specific penalty associated with zero-hours contracts.

It said it was well known that zero-hours workers earned less than permanent employees – 38% an hour less on average – but it had previously been assumed this was down to their concentration in low-paying sectors, and younger and less experienced staff.

“To get to the real pay penalty associated with zero-hours contracts, the foundation’s analysis compares the pay of zero-hours and non-zero-hours workers with similar characteristics and doing similar jobs,” it said.

Related: The Guardian view on employment law: an overhaul is needed | Editorial

“It does this by controlling for a wide range of factors including the worker’s gender, age, experience, qualification level, their occupation, the industry they work in and how long they’ve been in their current job. These factors explain around four-fifths of the overall pay gap between zero-hours workers and other employees.”

Zero-hours contracts are widely used by retailers such as Sports Direct and JD Sports, restaurants, leisure companies and hotels. The care industry is estimated to employ 160,000 workers on zero-hours contracts while the public sector, especially the health service, has increasingly adopted them.

Figures show the number of UK workers on zero-hours contracts rising steadily in recent years, and official data for the last year reveals a leap of 20% to more than 900,000, indicating that insecure employment has become a permanent and growing feature of the jobs market.

Laura Gardiner, a senior policy analyst at the Resolution Foundation, said: “Concern about the use and abuse of zero-hours contracts goes far wider than a few notorious firms. There is mounting evidence that their use is associated with a holding down of wages.

“While some people value the flexibility offered by zero-hours contracts, they also carry a significant ‘precarious pay penalty’ that can cost workers around £1,000 a year. That’s a big price to pay for work that too often lacks the security workers desire.”

The TUC general secretary, Frances O’Grady, said: “Zero-hours workers suffer the double whammy of lower pay and fewer rights at work. That’s why the Taylor review must drag employment law into the 21st century. Far too many workers have no power to stand up to bad bosses.”

Earlier this month a report by the thinktank showed that agency workers suffered an average pay penalty of 22p an hour, equivalent to £430 a year for those working full-time. The loss of earnings jumped to 45p an hour for permanent agency workers.

A report by the UK’s largest trade union, Unite, estimates that the number of workers in insecure employment of one kind or another has topped 5 million.

The government has commissioned a review of modern working practices by Mathew Taylor, the head of the Royal Society of Arts, who said after his appointment that he wanted to put forward reforms that gave workers more control over their lives.

In recent months several employers have distanced themselves from the growing disquiet at the overuse of contracts that offer no guarantee of work by offering workers full-time contracts. The pub chain Wetherspoons and Everyman cinemas have said workers will be offered more secure employment.

Be the first to comment on "Zero-hours workers ‘£1,000 worse off a year’ than employees"